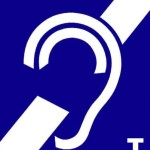 A hearing loop system is simply a thin strand of copper wire that radiates electromagnetic signals that can be picked up by the small receiver (t-coil) built into most hearing aids and cochlear implants.  The hearing loop system allows the person to hear only the sounds coming directly from the microphone not the usual background and interference noise.

In most places, hard of hearing people hear the broadcast sound, but only after it has traveled some distance from a loudspeaker, reverberated off walls, and gotten mixed with other room noise.  Hearing loop systems take sound straight from the source and deliver it right into the listener’s ear.  It’s as if one’s head was located in the microphone, or inches from a television’s loudspeaker—without extraneous noise, or blurring of the sound with distance from the sound source.

Think of the hearing loop system as the equivalent of a wheelchair ramp for people who used to be socially isolated because of their hearing loss.  People with hearing aids will immediately recognize how the loop system can enrich their lives.

Hearing Loops are a cost effective way to improve communication for the hearing impaired population, while conforming to  ADA guidelines. The photo displayed is the Universal Sign for communicating that the facility is using the Hearing Loop System.  Look for it in public places.

The hearing loop technology, which has been widely adopted in Northern Europe, has the potential to transform the lives of tens of millions of Americans, according to national advocacy groups.  As the loops are installed in homes, auditoriums, theaters, retail stores, banks, museums and other public spaces, people who have felt excluded are suddenly back in the conversation.  Almost any room or facility can be looped.

Hearing loss effects 17% of the adult US population; a number that is increasing as the population ages.  As of March 15, 2012 all newly constructed or altered state and local government facilities must comply with the 2010 ADA Standards for Assistive Listening Systems.

How does the Hearing Loop System work? 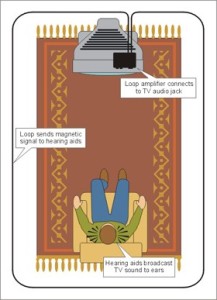 Hearing Loops consist of three basic parts – an amplifier, microphone and thin loop wire.  The loop wire is run around a room or auditorium, connected to the amplifier which is then routed to a TV, PA system, radio or microphone.

The Hearing Loop technology uses a magnetic field to wirelessly transmit audio to a person T-Coil enabled hearing aid or cochlear implant, or a Hearing Loop receiver with earphones.

The t-coil in a hearing aid is smaller copper coil that picks up magnetic field from the loop and converts it into electrical energy.   By switching the hearing aid to the “T” position, the electromagnetic field is detected.

The Hearing Loop technology and installation have existed for many decades, there is new technology, new configurations and a renewed national effort to encourage and promote the proper installation and use of loop systems.

Hearing Loop solutions offer individuals with the “invisible disability” of hearing loss the ability to experience full and rich audio interactions in just about any setting.  Users can enjoy a discreet listening experience without background noise, competing sounds, reverberation, or other acoustic distortions that reduce sound clarity.

There are now six different loop configurations or layouts that can be applied using today’s modern technology.  Each is engineered to comply with the specific needs and applications of various venues.

If you are interested in getting a custom quote, visit our contact page and send us an email.  We will response quickly and discuss your specific needs.

Hearing Loop Systems work with  hearing aids are fitted with a t-coil (65-75%) but the audiologist may not have turned on the program or the volume may be set very low and need to be adjusted to hear satisfactorily through a loop.

In some cases it is possible to add T-coils to existing hearing aids, but usually at greater cost than the minimal cost of t-coils with original purchase.  An audiologist can advise on cost.

There are international performance standards to ensure that those who have a t-coil hearing aid get a consistent quality of service, regardless of the venue.  For this reason equipment manufacturers and certified systems integrators have a vested interest in maintaining the objectives set forth in the IEC60118-4 standard.

In 2014, the Consumer’s Guide to Hearing Aids reported that 323 of 415 hearing aid models (71.5%) were now coming with telecoils, as were 81% of models larger than the miniaturized completely-in-the canal aid.  Moreover, the greater people’s need for hearing assistance, the more likely they are to have hearing aids with telecoils as did 84 percent of Hearing Loss Association of America members in one survey.  New model cochlear implants also offer telecoils.

You may ask, “Can hearing loops serve those without telecoils or without hearing aids?”  In this case, there are some business or public locations that offer all forms of assistive listening, including hearing loops, that come with portable receivers and headsets, all though most folks do not know of these units exist and fail to ask about the availability of them.

Where are Hearing Loop Systems installed? 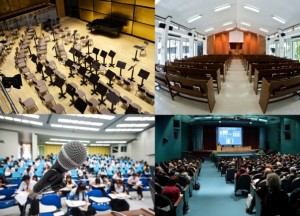 Hearing Loops can be installed in any room of a home or in public venues such as churches, classrooms, theaters, college auditoriums, music venues, just about any place where large or small groups gather.

It is important that loop systems be installed by a certified professional to make sure it meets standards and can be tested to ensure good field strength and user satisfaction. Hearing Loop Systems don’t exist in a carton or on a warehouse shelf; but only when carefully designed, installed and certified for proper operation.

Additional areas that the Hearing Loop System can be installed include:

A number of individuals have also looped their cars.  They have wired both a dashboard microphone and radio output through an under-the-seat amplifier and out to wiring that surrounds passengers.  The result is improved clarity of conversation for the hard of hearing, while still enabling them to hear sirens and horns, which are picked up by the microphone. 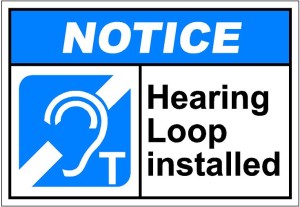 Hearing Loop System costs vary in expense, depending on the size and construction of the room.  Considering the benefit received the cost is very reasonable and the hearing loop system has minimal or no maintenance.

Costs may range from $200-$300 for a home installed TV room loop or wireless (neck) loop device to $2500 – $5000 for a typical smaller facility (i.e., church) where the wire can be installed underneath the floor in the dropped ceiling of the basement.  Some installations require extensive carpet work or wire installations in the grout of the tile floor.  This of course increases the expense.  Hearing loop are most easily installed during construction, remodeling or recarpeting.

Larger facilities with embedded metal will be more expensive.  Auditorium hearing loops cost somewhat more than do other assistive listening systems.  But the cost per user is typically less because many more people will use assistive listening that is hearing aid compatible. For the user, the t-coil cost is nominal and typically does not add to the hearing aid price.  More and more public auditorium are adding hearing loop systems to get in compliance with ADA guidelines.

There are many things to consider when creating a system design and installation plan. We have listed a few considerations. Proper installation also requires test equipment to ensure that the installation meets the requirements for audio loops to ensure sound clarity, sound volume and uniformity from one venue to the next.

The following design factors determine the type and size of the amplifier and the layout of the loop antenna.

This is just a sample of some of the items we consider in giving you a custom quote.  We encourage you to call us to discuss your particular situation.

We offer free consultation and written quotes for your business or home.

Give us a phone call or send an email, we would love to discuss your plans.

Send us an email: